The Vaughan-Scott Cemetery is located on private property next to the Waterwheel Cigar Store in Amelia City to the west of A1A. 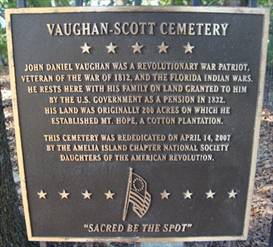 John Daniel Vaughan was a veteran of both the American Revolution and the War of 1812. The original monument was placed prior to the Civil War and was destroyed during that time. A six-foot-tall, four-sided obelisk was placed on the grave of John Vaughan prior to 1927. Tradition says that this obelisk and the original monument were placed by the U.S. government. It is thought that John Vaughan was the only veteran of both the Revolution and the War of 1812 buried in Florida.

Vaughan was married to Rhoda Effingham, daughter of Pharaba Milller. Rhoda Vaughan preceded her husband in death by many years. His final request was “to be buried in the same grave with his beloved wife.” Because of his request, it is assumed that she is also buried here.

Indications are that others are buried in this cemetery, but no definitive list of interments is known to exist. Graves one through ten are shown on the plat even though identities of the interred are not known. Grave 11 is W.E. Scott, Jr., and Grave 14 is the Vaughan obelisk.

The picture above is of the ceremony on May 7, 1927 for the unveiling of a marker at the grave of Lt. John Daniel Vaughan by the National Society Daughters of 1812, State of Florida. Four of the six generations of the family of Lt. Vaughan were present, including Mrs. Mary Vaughan Scott, granddaughter; her daughters Mrs. Hugh J. McCallum and Mrs. Louis Goldstein; Mrs. Scott’s grandchildren, Wilbur Scott, Miss Florida Scott and Miss Thelma Goodbread were in attendance. Mrs. Mary Vaughan Scott is at the center of the picture, assisted by her two daughters. A detachment of U.S. Marines from the United States Coast Guard cutter Yamacraw is also visible.

Following is a sketch of John Daniel Vaughn’s life presented at the dedication: 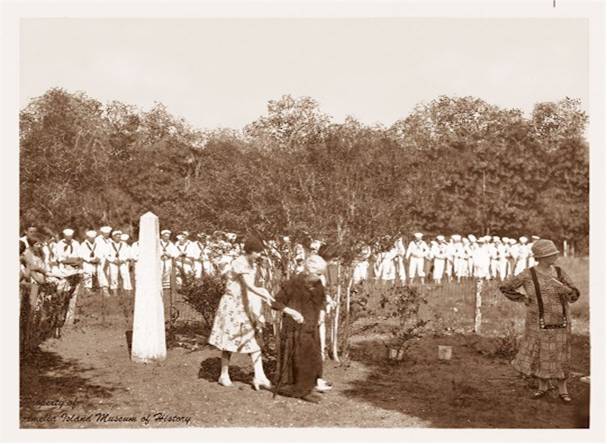 Dedication of the Vaughan Obelisk

John D. Vaughan was born in Boston Mass., March 13, 1763. His parents were Henry and Mary Humphrey Vaughn, native of Dorchester, his mother’s family being one of the most conspicuous of that historic town. Of his childhood, there is no record. He entered military service at age 14, although he gave his age as sixteen in order to secure enlistment under existing army regulations. As the Massachusetts records testify, he enlisted in January, 1777, a private in Captain Wiley’s company, Colonel Michael Jackson’s regiment, and was honorably discharged in 1783.

Following the Revolution he rendered service in the Indian wars in Captain Pierce’s regiment, commanded by Colonel Hamar in the year 1785, and was honorably discharged in 1786

From the official records it is shown that the military services of the young Massachusetts soldier coved in all a period of nineteen years. After the Revolution, he served continuously in Pennsylvania and other states. January 11 1795, he was appointed lieutenant of militia at Burnt For, GA., and continued as such until Jan. 1796. It was about this time that he married Rhoda Effingham, niece of Thomas Harvey Miller, owner of a notable plantation at Peter’s Point near St. Mary’s Ga. Her mother was Pharaba Miller, whose kinsman, Phienas Miller, married the widow of General Nathaniel Greene, to whom the State of Georgia deeded Dungeness, the southern portion of Cumberland Island, as a reward for his distinguished services in the Revolutionary War.

In 1797 Lt. Vaughan received from the Spanish government a grant of a large tract of land on Amelia Island. The exact extent and date of the grant is not known, as for many years before and for nearly a quarter of a century afterward, the loose Spanish control of Northern Florida and the constant entanglements of the nominal government of France, England and the United States made the keeping of accurate records an impossibility. He also received one hundred acres bounty land for service in the Revolution and a grant for service in the Indian War.

When the United Stated declared war on England in 1812, fired with the spirit of loyalty to his country, he left his family on his Amelia Island Plantation crossed the St. Mary’s river into Georgia and once more entered military service, remaining in the service until the close of the war.

The rest of John Vaughan’s life was spent in peace and plenty on his plantation covering the lower portion of Amelia Island bordering the Atlantic Ocean on the east, and the inland waterway on the west. The Vaughan plantation was one of three or four into which the island was divided, and according to authentic records he owned 500 slaves. Assisted by his son Daniel, he raised large crops of cotton for which the islands of the South Atlantic coast were famous. The first sea island cotton grown in this country, historic records show was on the southern end Amelia Island.

Thanks and credits to the Amelia Island Museum of History for the use of the dedication picture, and to Ann Fontaine for restoration of the picture.

Inscriptions on the Obelisk

When in the coming years the stranger shall read this epitaph, remember that this monument marks the spot of one who lived in the times which tried men’s souls and that he assisted in bequeathing to you the rich legacy you now enjoy. Sacred be the spot.

He bled for liberty and bequeathed as a legacy to his posterity, resistance to tyranny and oppression. Peace to the ashes of the truly great.

Almost the last of the Heros of the revolution, his life faded calmly. It was marked by all those virtues which adorn a hero, eventful and determined. He lived repsected, he died beloved, Rhoda his wife.